Bread and Puppet Theater Show on March 6 a Great Success 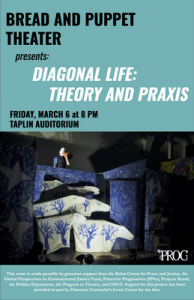 On Friday, March 6, Bread and Puppet Theater performed its “Diagonal Life: Theory and Practice” show for a large audience of Princeton students, faculty (and their children), and community members in the Taplin Auditorium in Fine Hall. The twenty-member ensemble (which included Class of 2018 valedictorian Kyle Berlin) began the show with a performance by the company’s brass band, and audience members picked up programs and the latest copy of The Prog at the door. The show featured large paper-mache faces, a many-handed puppet, dancing chairs, a tableau of yellow suns and lions, and a series of lessons from the “University of Tricks,” among other musical and theatrical absurdities. After the show, Bread and Puppet served its famous bread and aioli, and sold the company’s artwork in the lobby. This delightful event was sponsored in part by Princeton Progressives.